A rare miracle for the most complicated c-section 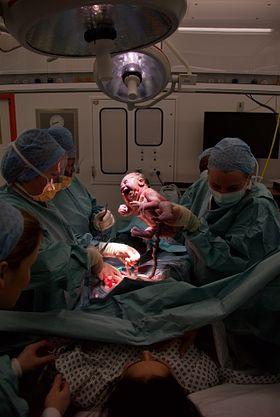 This patient's case is one of the rare ones that carry with her a beautiful success story crowned with joy and happiness; where doctors were able to save her life and the life of her fetus.

She, later on, was discharged from the hospital in great health; which reflects the professionalism and distinctive skill of obstetricians and gynecologists in the Saudi German Hospital and how they deal with all cases as if they were family.

The case is a 45-year-old woman in the thirty-fifth week of pregnancy, her condition was diagnosed in a public hospital in the city of Qurayyat; Where she'd had 11 cesarean sections previously which is a very serious case, As the scientific studies recommend that C-section surgeries that a woman can undergo throughout her life should not exceed five surgeries; and that to avoid damages happening to the uterus.

And with the placenta stationing and covering the site of the previous cesarean sections, the total number of operations she’d had, the condition became dangerous for the child and the mother.

To deal with such cases, the attending physician needs to have a high degree of knowledge and experience to perform such complex surgical interventions, so these cases are referred to us after they have been refused admission from all other hospitals due to their seriousness.

Dr. Tarek, the general manager of the hospital, personally intervened and helped facilitate her admission; and requested to prepare 6 units of blood specifically for her and direct the operations and intensive care staff to fully prepare for the necessary surgery.

The pregnant woman was admitted to the Department of Obstetrics and Gynecology in preparation for a complex surgery; where she was under the care of professional medical staff, and the surgery was a complete success.

And the patient and her baby were discharged from the hospital in good health after only three days, and the parents thanked the medical staff and the hospital.